The last thing Paige wants is to fall in love with another celebrity.... 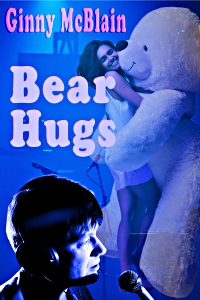 The spray's full force caught her square in the face and chest. "St-st-stop!" Paige sputtered. She stood rooted to the spot, unable to think or move, while her precious child drenched her.

Jamie chortled and dropped the hose, catching Bonnie with the water, and then dashed into protection of the house.

Bonnie doubled over laughing, tears running down her cheeks. "I wish you could see your face. You asked for that, Paige. Don't you know better than to dare a male, no matter what their age?"

"It's not funny," Paige muttered, pulling her almost transparent cotton T-shirt away from her breasts. She marched to the faucet.

Paige reached down and turned off the water.

"Is one of you Paige Holbrook?"

Stiffened in a half straight position, Paige groaned softly. That voice. She knew that voice, but she couldn't quite place it. Turning in slow motion she faced the voice.

A man Paige had never seen before dismounted a bicycle. Glancing down at herself, she wanted to die, or at the very least hide under the rose bushes. There wasn't a dry stitch on her. The pattern of her lace bra showed through the wet cotton, and her nipples stood out. Water trickled from her shorts cuffs down her legs.

She'd kill her kid. No, too easy. She'd exile him to Siberia. No, he liked snow. Burying him alive in an ant farm was what he deserved.

This man, whoever he was, was one stunning specimen.

His blazing blue gaze was fixed on her chest. Her cheeks turned fiery hot. Where was a nice dark cave when she needed one?

She looked away and back again and scrutinized the stranger, from his wicked grin down the length of his muscular physique. Her mouth went dry.

A black T-shirt hugged his broad shoulders. He'd rolled the sleeves over bulging biceps. His form-fitting black and neon blue bicycle shorts clung to his narrow hips and thighs, leaving little to the imagination. If the back of him lived up the promise of front, and she had no doubt it did, he had great buns. She licked her lips, more warmth crawling up her neck. "I'm-- I'm Paige."

"I--um--" He cleared his throat. "--seem to have caught you at a bad time." He set the kick stand and tugging at his chin strap, removed the shiny black helmet. Hooking his aviator sunglasses in the neck of his shirt, he stepped forward. "I'm Hunter Blackwell. I couldn't ride by without stopping to say hello."