A woman with a past, a minister overwhelmed with problems aren't exactly a match made in heaven...or are they? 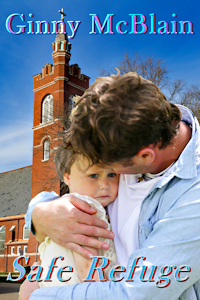 All right, Holliman, get it over with. Lie down and turn out the light. He put thought to action, and slipped his belt from the loops and unbuttoned the waist of his jeans. He detoured to the side of the mattress where Hope slept and kissed her forehead. Turning, he gave Kirsten a quick hug, and wished he dared hold her as long and firmly as he wanted. "Good night."

Before he did something he'd regret, he crawled into the makeshift bed and pulled the covers over him. He looked over at Kirsten. "Are you ready for me to turn off the light?"

"Just a second. Let me put out the candles."

She blew out both wicks. He watched her slip into bed and arrange her terry robe over herself. It amazed him that she'd come up with so many resourceful ways to manage. It was obvious she was accustomed to making do with limited means. He admired that, even though it spoke of experiences he wished she hadn't gone through.

He snapped off the lantern and watched the firelight bathe the room in an eerie glow. Shadows danced on the walls to the tune of the whistling wind and staccato drumming of ice on the glass. It reminded him of sleeping in the open. What a blessing to have shelter from the wind and wet, even if the house was cold.

Michael twisted onto his side in an attempt to find a comfortable spot. Kirsten was right. The couch was lumpy. She had scrunched down, her head almost completely covered by the blanket. Her back was closest to him. That was good. The view of a full-size lump beat the torture of seeing her beautiful face in the graceful glow of the fire. He turned over, facing the couch back. His mind refused to let go and allow slumber to come. Somehow, that didn't surprise him.

If he wasn't going to sleep, at least he'd best quit thinking about Kirsten. That only made him even more uncomfortable. His time would be better spent trying to figure out how to help the people in the neighborhood around the church.

The lack of electricity inconvenienced everyone, but for the older folks it was a real hardship. Somebody should keep an eye on them. If he could gather the neighbors together at the church, it would be benefit everybody. If the power wasn't restored by morning he'd start the ball rolling.

Kirsten heard Michael turn over. Was he warm enough? Hope's sturdy body snuggled against her added warmth to the bed they shared, but Michael was alone. It took all her will power to keep from asking him to join them on their pallet. Why make a difficult situation even more so? Sleep eluded her. If the restless tossing from the couch was any indication, Michael wasn't sleeping any better than she. Kirsten lay stock-still, pretending she'd dozed off.

The minutes dragged on. The fire died down. The room temperature went from almost warm to close to frigid. She shuddered at the thought of poking more than her nose beyond the meager covers. Even though she spent several minutes on a mental pep talk, her body refused to obey the sensible command of her brain.

Covers swished. Kirsten cracked her eyelids. Michael tiptoed toward the fireplace, silhouetted by the faint glow of the dying embers. The screen's mesh curtain whished as he set it aside. He laid three logs on the grate and blew the embers into flames. From the safety of the bed, she watched him work. It was too dark to distinguish anything more than his crouched shadow and the soft sheen of his dark hair. Her memory and imagination filled in the movement of his muscles and the snug fit of his jeans. Her fingers itched to plow through his short curls. She squeezed her eyes shut in a vain attempt to corral her wayward thoughts.

For more information, visit Uncial Press,
or buy now from AMAZON, the NOOK store, KOBO, or your favorite ebookseller.